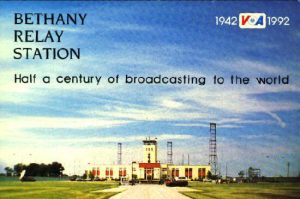 The Voice Of America Event

During the summer of 1996 Paul, K9CDW and Brian, W9HLQ noted that the VOA (Voice of America short wave international broadcast) site at Bethany, Ohio was scheduled to be dismantled. The site is one mile square (a mile on each side) and full of antennas. Some of the towers holding the antennas were over 300 feet high. Paul and I (the author of the QST article) decided it would be fun and unique to tap into those fantastic antennas.

So we sent several faxes to the site in Dayton and then on the Washington, DC where the VOA Headquarters was located. We did receive permission to operate one day on a Thursday, May 16. Further, there was to be no prior publicity of the event. We feel this was to avoid having lots of crowds at the site.

You must read the QST article* to get the full impact of this dream event. Can you imagine putting your ham transceiver on an antenna that is over 300 feet high? I was afraid that all the RF in the air would blow out the receiver section of my Yaesu FT-900. Those antennas were designed for transmitting….not receiving.

The antennas available were a mix of full size rhombic at 170 to 200 feet in the air and in the clear. Also, we could use the huge antenna switch (I could drive my car through it) to select a curtain antenna aimed toward Europe. The rhombics were directed to various points of the compass, but most were aimed to southern Europe and Northern Africa.

Well, needless to say….it was fun. We used 450 ohm and some coax to hook to the 300 ohm balanced system of the antenna farm. The band conditions were very bad…bottom of the sun spot cycle. Most of the signals were around S9 on the FT-900 rig. The system loaded up very easily and I worked many Europeans….the first was a LA1. He was sure surprised to hear State-side coming through at that time of day! We never did get any sort of pile-up going. Most of the contacts were due to calling CQ or breaking into a European QSO.

One observation was the rhombic antennas were very quiet. Little local noise pickup or QRN was heard. It seamed that you either heard the stations or nothing. We were working on 20 meters so we could not rotate the antennas, of course. So even if we heard good DX, it had to be from the target area of the antenna or we could not hear or work it. So there is something to be said for a more modest ham-style beam that can be directed to the station.

The VOA site was selected in the heartland of the USA for physical security. During World War II it was considered a serious threat for saboteurs to attack the transmitter site. The location near Cincinnati was chosen to be far from either coast and possible enemy infiltrators. Notice the lookout tower high on the transmitter building, much like a prison watch tower. It is not known if this tower was actively manned.

* Read the details of this unique event in the October, 1996 issue of “QST”, the Journal of the American Radio Relay League (page 50). 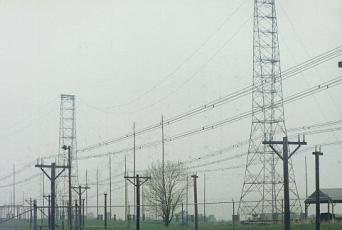 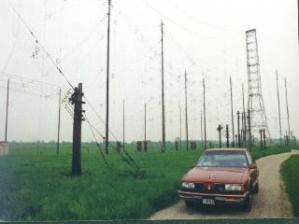 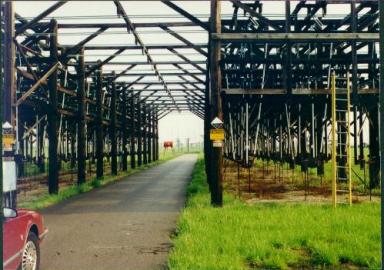 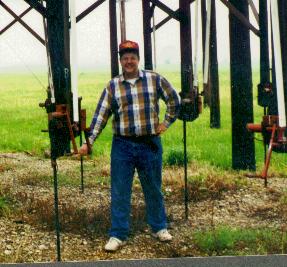 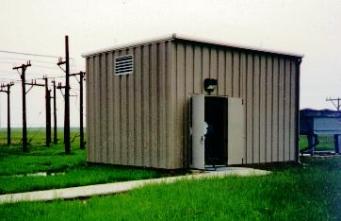 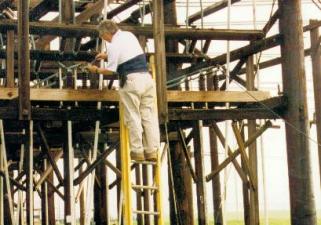 This was our hamshack – it used to house a 250 kW dummy load!
Right: paul, K9CDW connects our coax thru a balun to balanced feed line (copper pipe!) 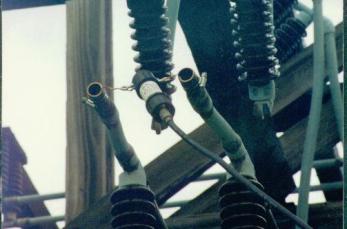 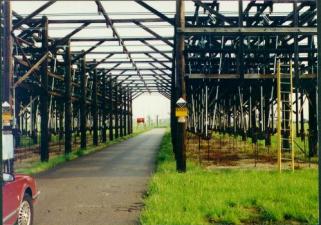